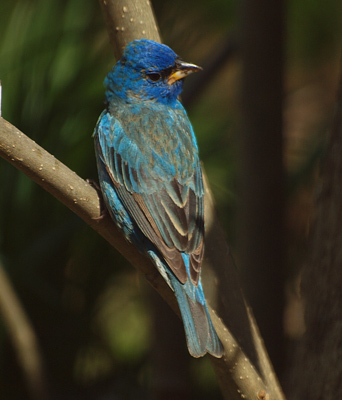 Male Indigo Bunting - note how the feathers appear turquoise in this light;
his beak is bicoloured but half is mostly unpigmented 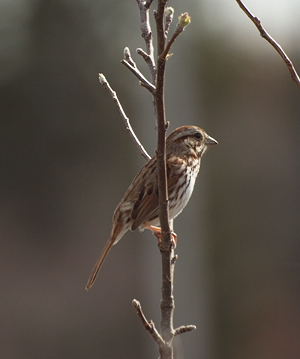 Song Sparrow
Garden Birds Updated ...
It has been awhile since I last posted photos to this site, and I've recently seen many interesting species
that deserve to be shared. Included are a few oddities and unexpected visitors as well as the more usual
inhabitants of my locality. I'm using larger photos for this page so their beauty can be more easily enjoyed. I hope you'll like them. I'll add more as the birds continue to arrive. 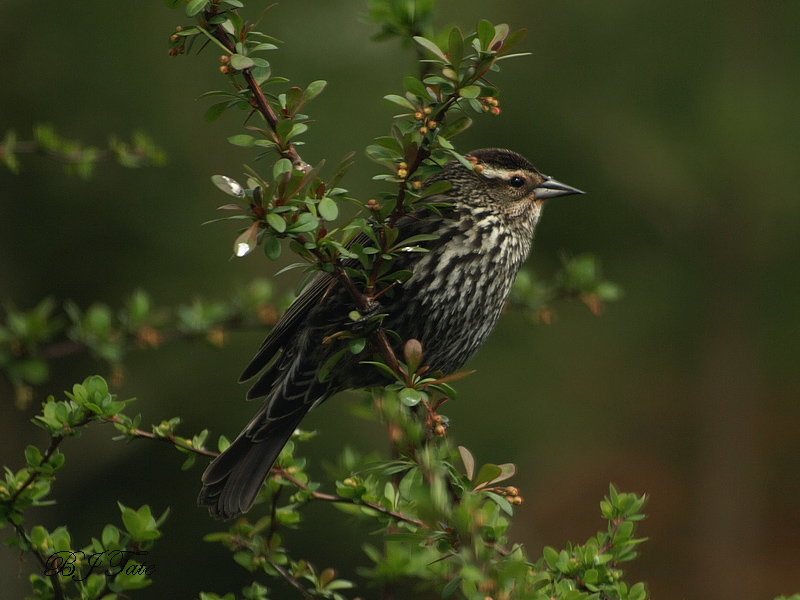 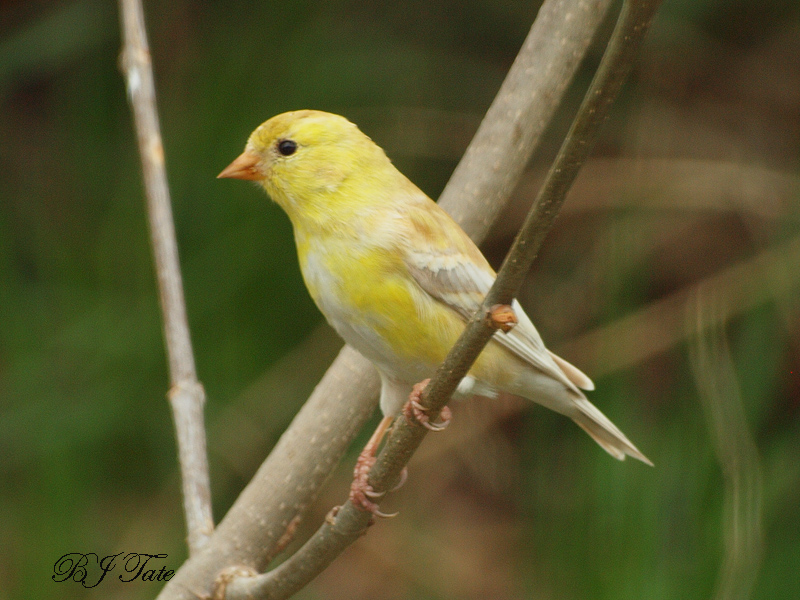 Leucistic male American Goldfinch. A leucistic bird is affected by a mutation that replaces dark feathers with light or white ones. Note also lack of pigment in beak and legs, but not the eye. This is not the same genetic anomaly as albinism.  (Photo taken in my garden, Tusket Falls - April 2012) 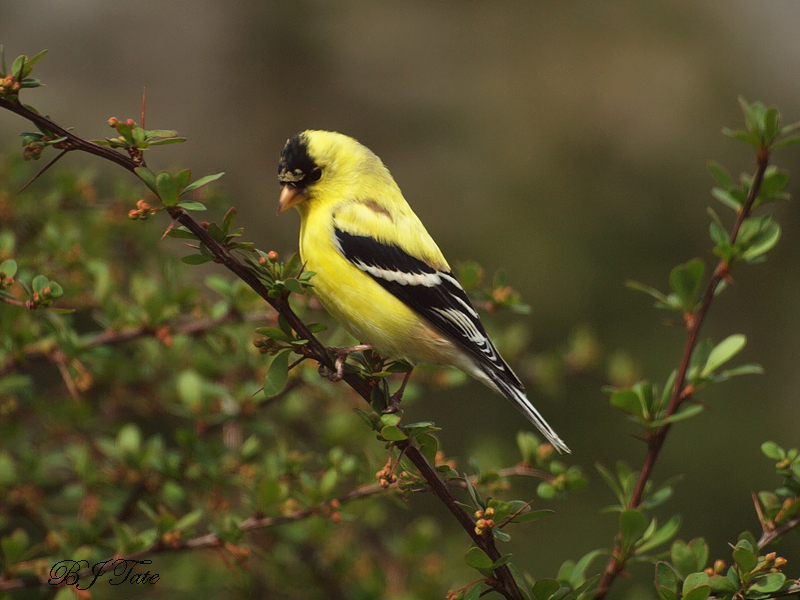 Normal male American Goldfinch, taken at approximately the same time as the shot of my leucistic bird.  Note the location of the dark pigment. 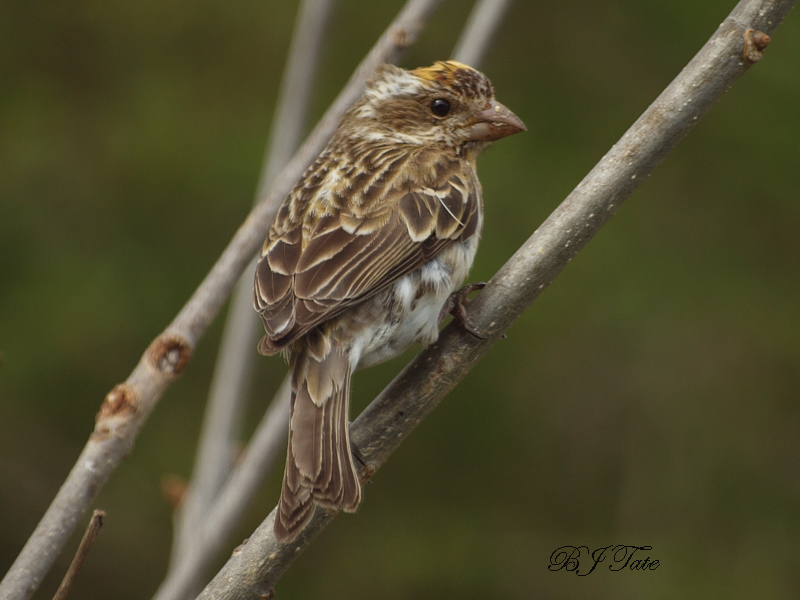 Xanthochromic (also spelled Xanthochroic) Male Purple Finch - instead of the usual raspberry-red feather highlights, his are orangey-yellow!
He is a juvenile bird in his second year so hasn't developed his full adult breeding plumage yet.  Cornell Ornithology Lab did a survey of "oddball
birds" showing up at feeders and among all unusual colour variations, xanthochromism showed up in only 4%.  (taken in my garden, April 2012) 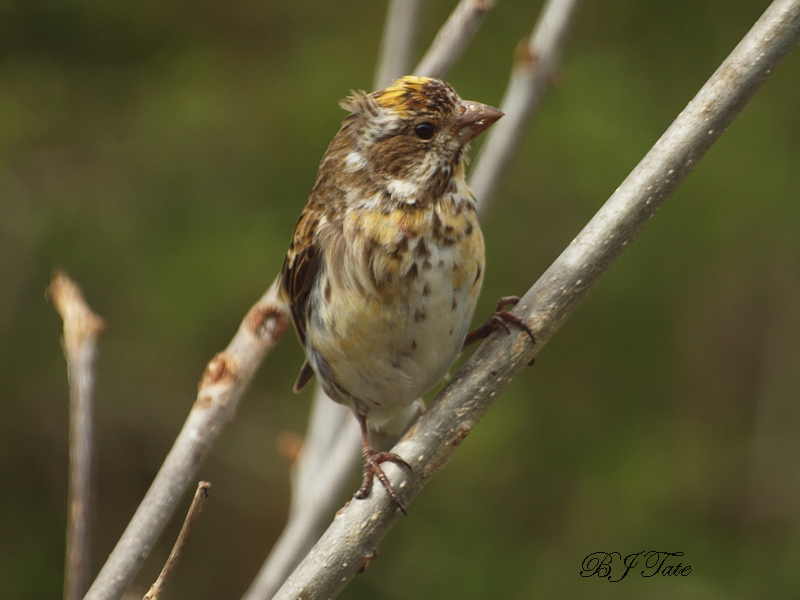 Another shot of the Xanthochromic Purple Finch which shows the orange and yellow on his breast, as he develops his adult breeding pigment.
Normally, this would be a wine or raspberry red.  According to my research, xanthochromism is only seen in male birds. 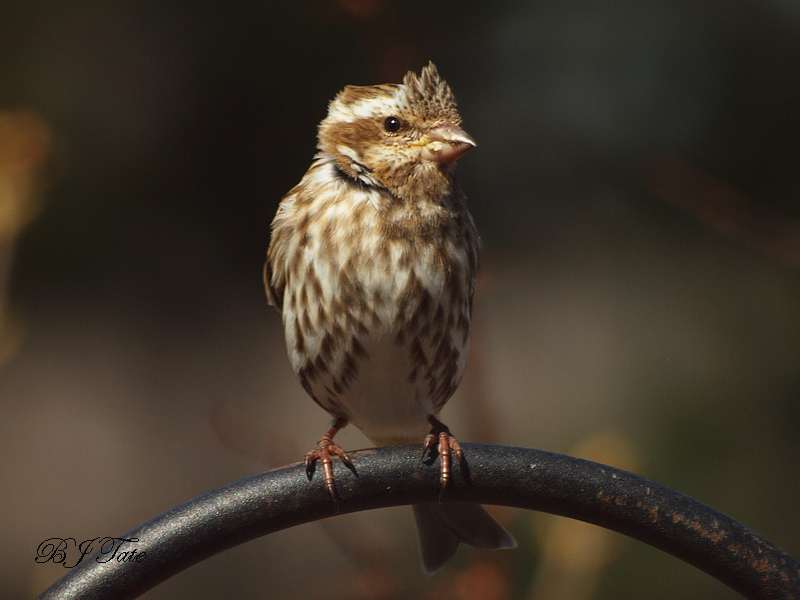 By way of comparison, this female Purple Finch lacks any colour pigment except for the usual browns and beige or white.  Her feathers
are standing on end because it was a very windy April Fool's Day! (April 1, 2012) 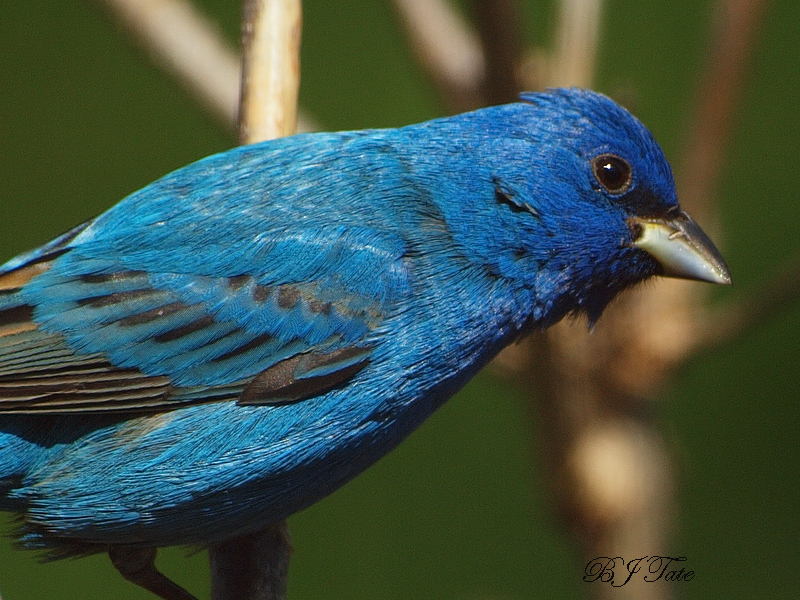 Male Indigo Bunting - head study - These birds are actually brown, but their feathers reflect the light so we see only the blue end of the spectrum.
There is no blue pigment at all! On a dull, dark day they will appear brown. The best colours are shown in sunlight. (taken in my garden at Tusket Falls, April 2012) 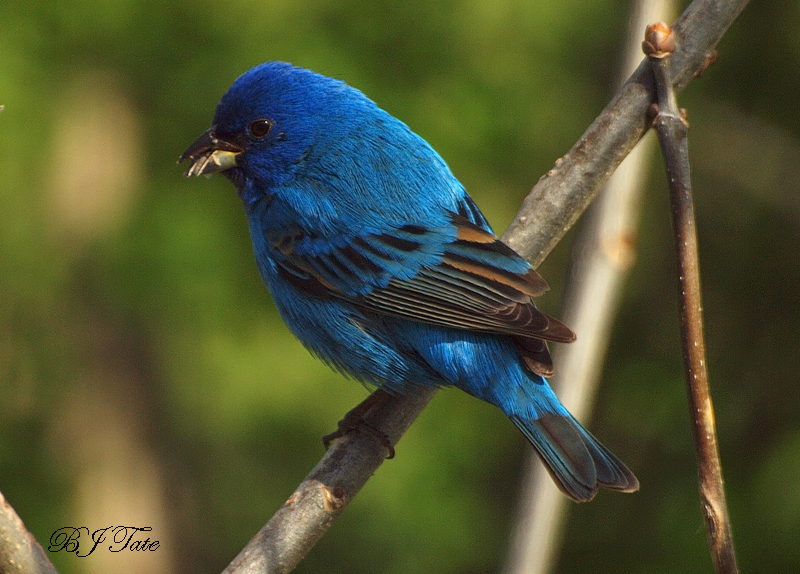 Here is a male Indigo Bunting in sunlight.  Note that his beak is bicoloured with two tones of grey; this is one way to distinguish him
from the other male on the side panel at right and below. (April 2012) 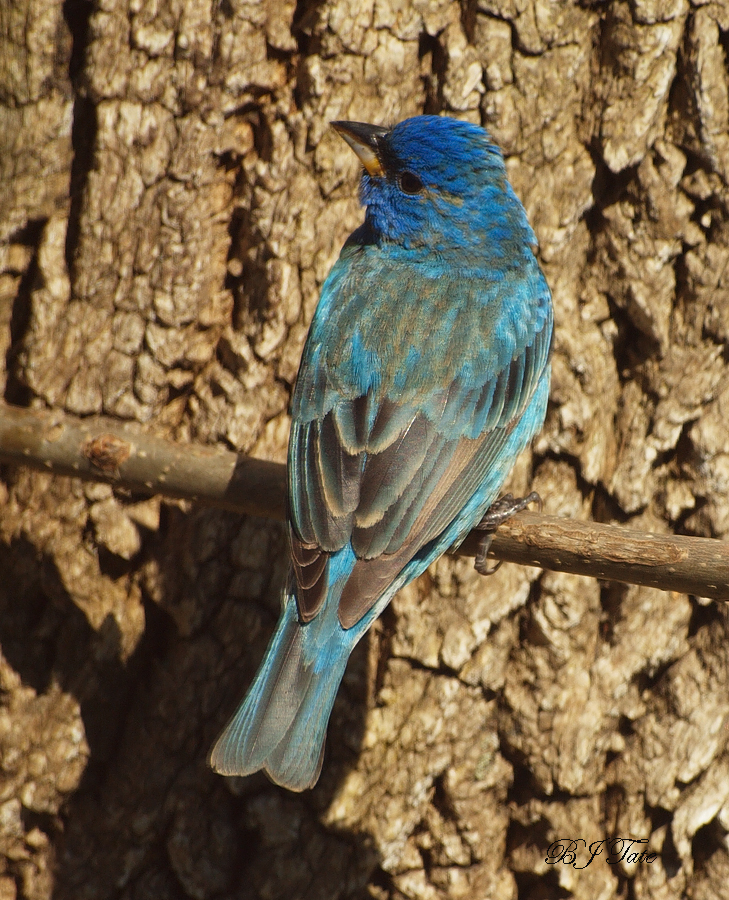 This is a different male from the one above; he looks more turquoise and has more brown showing in his plumage.
The direction and intensity of the light make him look more washed-out.  Note that his lower mandible is pinkish-yellow. (April 2012) 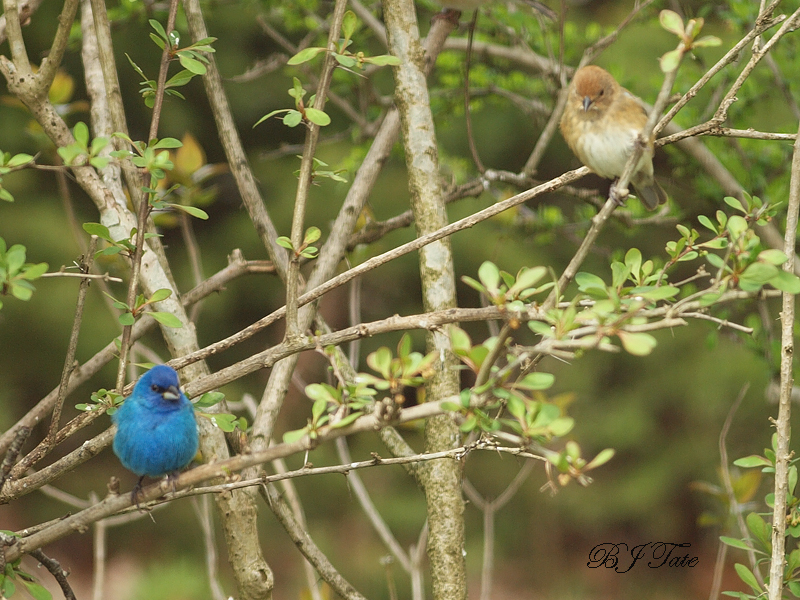 Here is a pair of Indigo Buntings. The female has faint touches of blue on her wings and tail but is otherwise rather plain.  (April 2012) 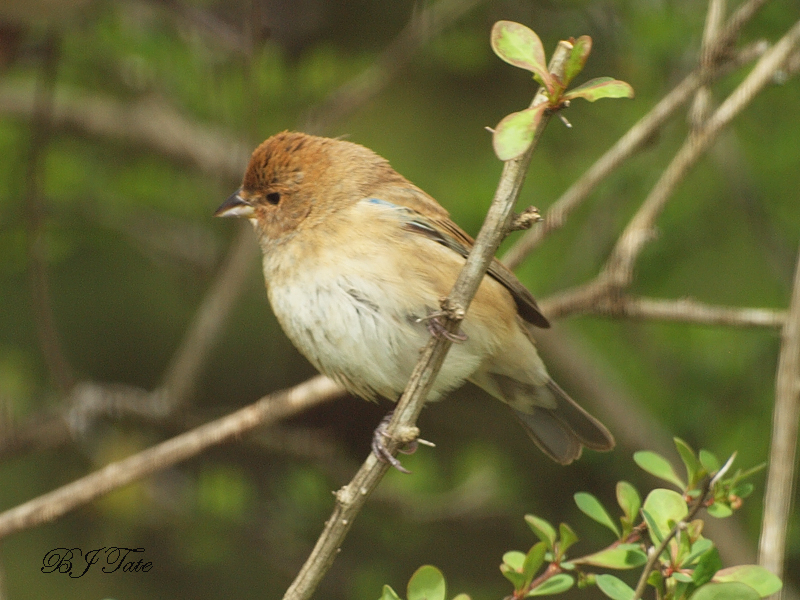 Primary Colours - here are three species of finch. Each bird is male, starting with the American Goldfinch at left, then the Purple Finch and finally,
two Indigo Buntings. (April, 2012) 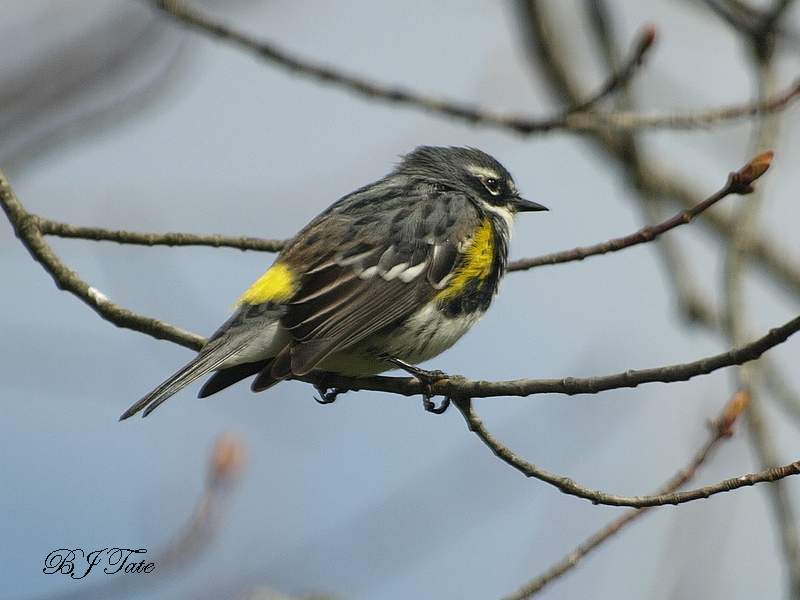 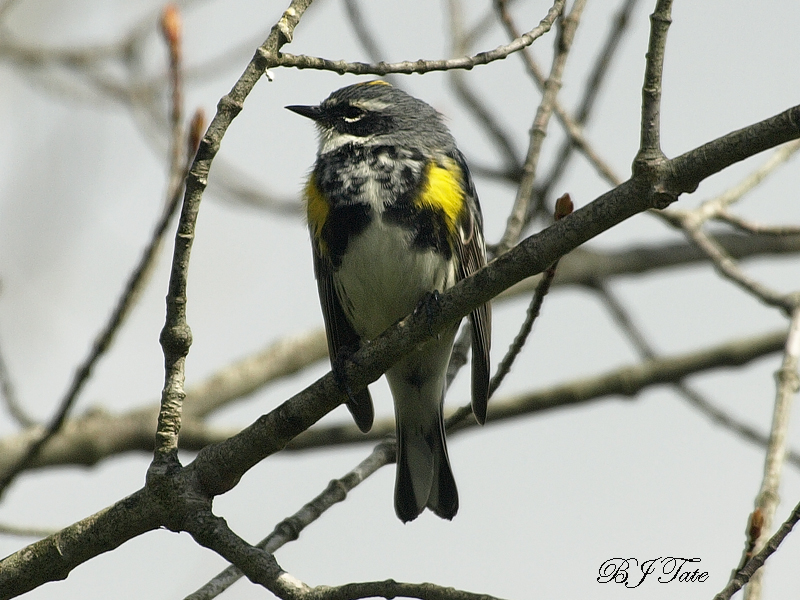 Male Yellow-Rumped Warbler - his chest markings are so pretty! (April 2012) 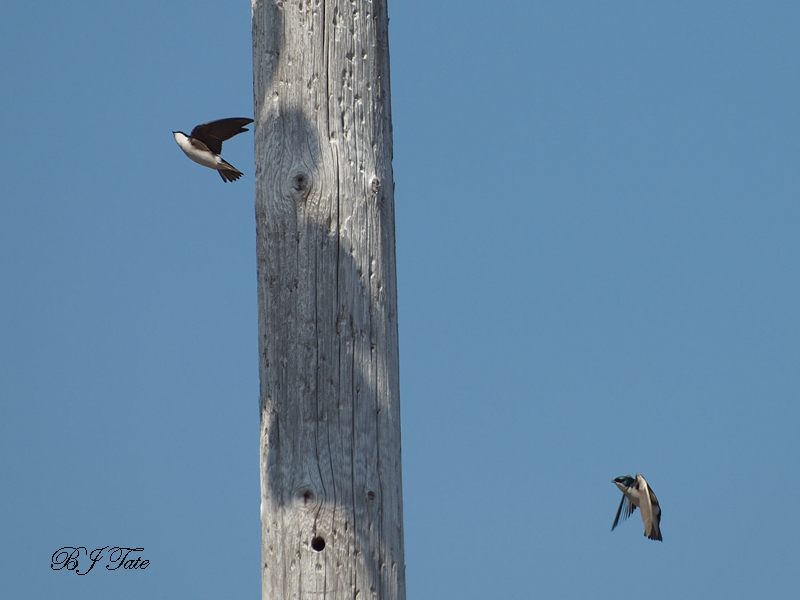 Tree Swallows - perhaps they are nesting in a hole somewhere on this pole. Note their tails, which are straight across and not forked like those
of the barn swallow. Tree swallows arrive a week or two before the barn swallows. (April 2012)